There are hundreds of insect species that have adapted to living in and/or feeding upon stored food products, but the ones described below collectively account for a very high percentage of pantry pest infestations experienced by consumers in the United States. 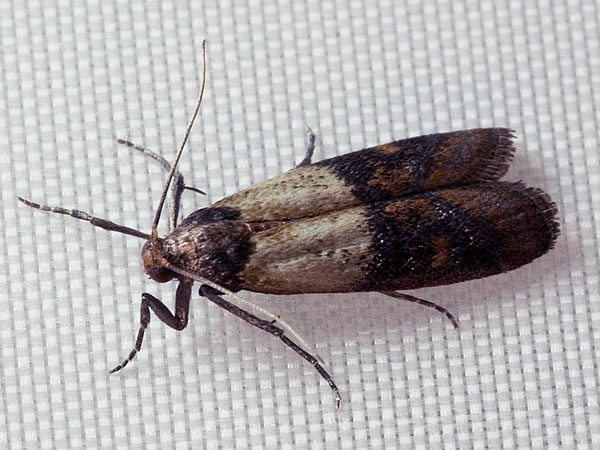 Like many stored-food pests, these moths are named after their favorite food. "Indian meal" is another term for corn, and corn is the preferred food of these common moths. But they'll eat almost any plant-based food if need be.

Adult Indian meal moths are about 1/2 inch (about 13 mm) in length and are gray, black, and brown in color. The larvae are creamy-colored and infest many plant-based foods, especially milled and processed grains products like corn meal, flour, etc. The larvae have three pairs of thoracic legs and five pairs of abdominal prolegs.

As is the case with many stored-food pests, it's the larval stage of the Indian meal moth that does the damage. The adults don't feed. They only live long enough after emerging from pupation to mate and for females to lay eggs.

The larvae, on the other hand, are able to chew their way into paper and cardboard bags and boxes of grain products to feed. They also leave silky web-like deposits on the food they feed upon, thus damaging more food than they actually eat.

The time needed for Indian meal moths to complete their life cycle is extremely variable, ranging from less than a month to more than 10 months, depending mainly upon temperature and the availability of food. 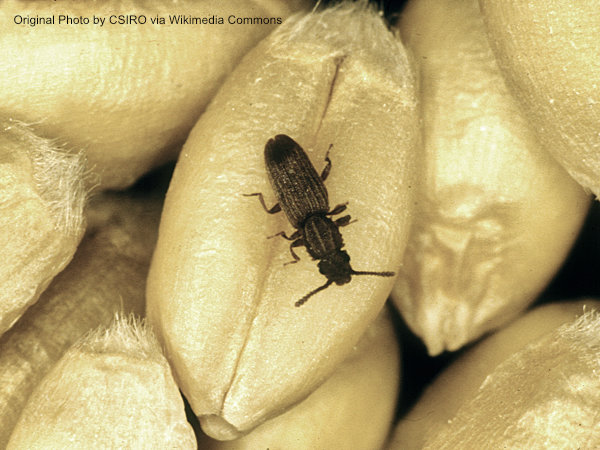 Sawtoothed grain beetles are one of the most frequently-encountered stored food pests. They're commonly found in flour and other milled grain products, pasta, cookies, bread, and almost any other plant-based food. Unlike many other stored-food pests, both the adults and the larvae of sawtoothed grain beetles feed. In fact, the adults can live as long as three years under ideal conditions (but adult life spans of six to eight months are more common).

Adult sawtoothed grain beetles are about 1/8 inch (about 3 mm) in length and reddish-brown in color. Their name comes from the distinct sawtooth pattern on the sides of the thorax. Their larvae are creamy white and feed on small particles of grain-based and plant-based foods.

The feeding of sawtoothed grain beetles can cause a reduction in volume of the foods they're feeding upon. This is commonly called "shrinkage." If you buy a box or bag of plant-based food like flour or rice, and it looks like there's quite a bit missing, check it carefully. It may be infested. Sawtoothed grain beetles also raise the humidity inside the food packages, which is conducive to mold growth. 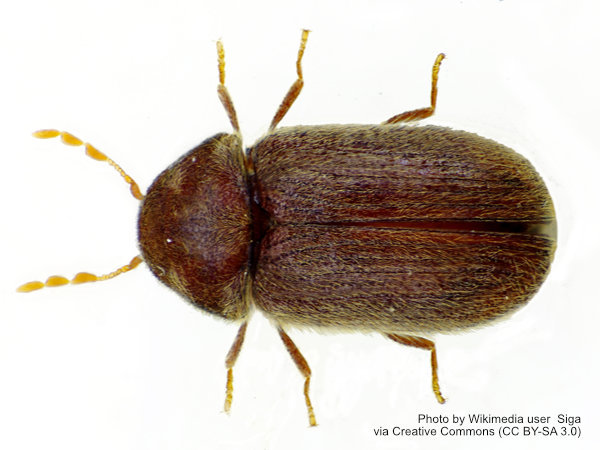 Adult drugstore beetles are about 1/8 inch (about 3 mm) in length, are brown in overall color, are good fliers, and are attracted to light. The larvae are cream-colored.

Drugstore beetles feed primarily on cereals, cookies, chocolate, spices, dried plants, tobacco, and pet foods; but they'll also eat leather, taxidermy, bookbinding glue, and pretty much anything else if they get hungry enough. Their common name refers to their fondness for the herbs that traditional pharmaceuticals were made from.

One telltale sign of a drugstore beetle problem is the "shot holes" they make when the adults chew themselves out of whatever they pupated in. Drugstore beetles can easily chew through most packaging materials, including aluminum foil.

One of the reasons why drugstore beetles can digest and thrive on so many different kinds of foods is because they harbor symbiotic yeasts that actually do much of the digesting for them. Adult beetles coat the eggs they lay with the yeast, and the larvae consume them during the hatching process. From that point on, beetle and yeast will spend the rest of their lives together, each depending on the other for survival.

Drugstore beetles are closely related to the cigarette beetle, which has similar habits, but whose wing covers lack the ridges that are prominent on the drugstore beetle. 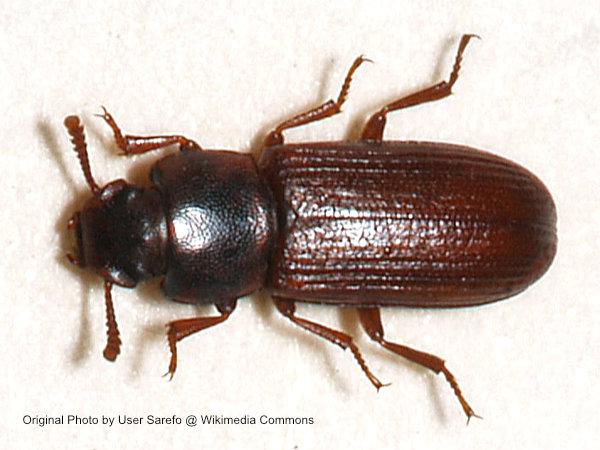 Both of these beetle species will also feed on dust that forms from milling operations or simply from transporting grain products.

As is the case for most stored product pests, confused flour beetles and red flour beetles contaminate far more food than they consume. They scatter dead bodies, shed skins, and fecal matter throughout the food. They also excrete quinones that are foul smelling and taste even worse into the food, making it unusable. 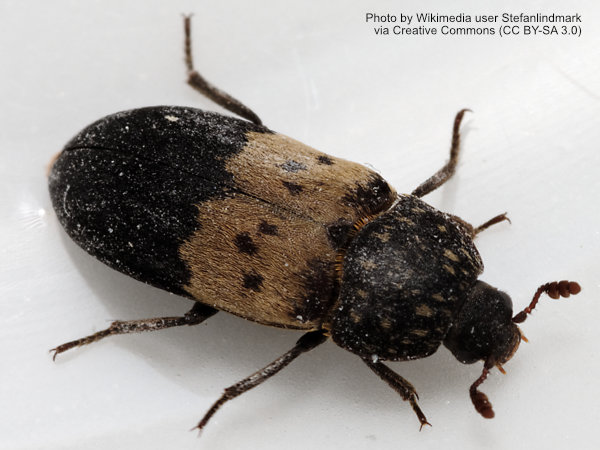 There are many species of Dermestid beetles, some of the more common of which are larder beetles, carpet beetles and cabinet beetles. The one pictured here is an adult larder beetle. A picture of the larva can be found here.

One sign that you have a possible larder beetle problem is holes. The larva bore holes into pretty much anything that contains meat. They'll also bore into materials including wood and some metals to create a safe, protected place to pupate into adults.

This propensity and ability to bore holes make larder beetles one of the more difficult insects to seal out of food. There are very few materials that larder beetles can't bore through. Stainless steel bins and glass jars with tight-fitting lids are probably your best bets to seal larder beetles out of your food.