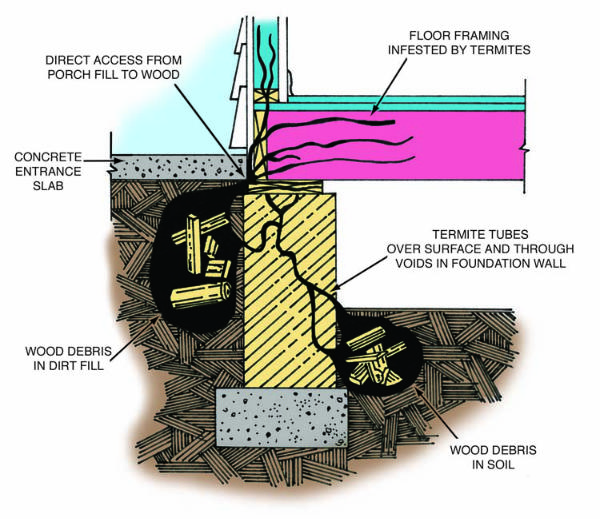 Subterranean termites are highly-developed social insects who live in the soil (hence their name) and eat wood.

Because they are very susceptible to dehydration, can be injured by direct sunlight, and are considered tasty fare by many birds and other woodland creatures, termites must stay hidden and either in or close to the soil at all times. This means that termites can go undetected for many years, silently eating away a home in secrecy.

In nature, termites have an important role: They eat dead trees and, with the help of bacteria in their digestive systems, they digest the wood and return the nutrients to the soil. They are the only insects who can digest the cellulose part of wood.

The problem is that termites aren't especially bright. If they stuck to eating dead trees, no one would bother them. But termites make no distinction between dead trees in the forest and dead trees that we call "lumber" and use to build houses; and so every year, millions of dollars are spent in the perpetual battle between humans and termites.

For their part, the termites would be very happy to never leave the soil at all. They like living underground. The temperature fluctuations are less extreme than those about ground, the humidity is where they like it, all their friends are there, and there are few predators looking to eat them. If the termites had their way, they'd probably never come out of the dirt.

The problem, if you're a termite, is that there's not always enough dead wood in or lying on top of the ground to feed the colony. That means that sometimes they have to commute to where the wood is in order to keep their bellies full. 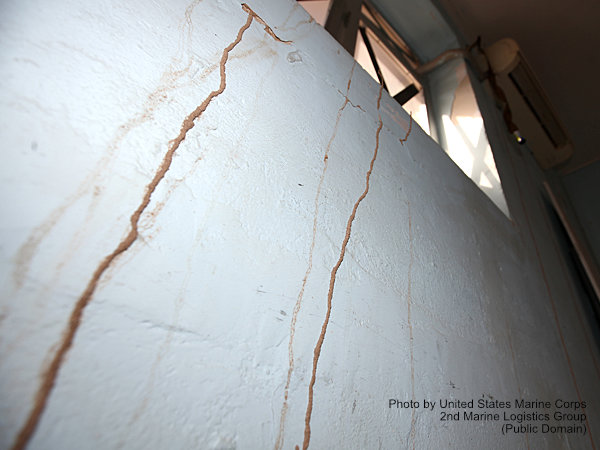 The necessity of leaving their comfy underground nests to go find wood to eat presents several problems for termites:

First of all, subterranean termites are very susceptible to dehydration and need a high humidity level in order to survive.

Secondly, termites are also very sensitive to light and need to avoid it at all costs. Termites don't tan in the sun. They die. That's probably one of the reason why there are no termite tanning salons.

Finally, many insects and other animals (including some humans, believe it or not) consider termites a delicacy, so they need to protect themselves against being eaten. Their daily excursions to find food put them at risk of becoming food.

The solution termites have come up with is pretty ingenious and industrious: They build shelter tubes (sometimes called "mud tubes" or "termite tunnels") between the soil and the wood. The shelter tubes provide sufficient humidity, protection from light, and some protection from predators. More mature termite colonies even station soldier termites in the tubes to fight off predators who breach the tubes while the worker termites rebuild the tubes.

Fortunately, there's a pretty easy way to tell whether termite shelter tubes are active: Just break each shelter tube with your finger (or with a scraper or putty knife if you're squeamish). If there are termites inside, then the tube is active. If not, then it isn't.

One of the reasons that termites are so successful is that their highly developed caste system. There are four distinct castes of termites, of which three are seldom seen because they live underground. 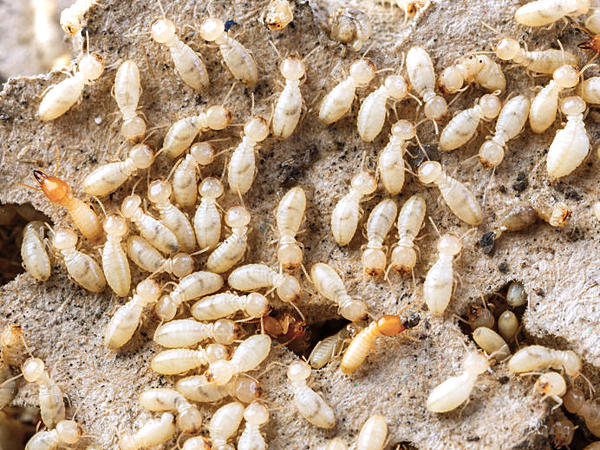 Worker termites, like workers everywhere, are the backbone of a termite colony. Most of the termites in this picture are workers. The few with the enlarged, pincer-like mandibles are soldiers.

Worker termites are tiny, non-reproductive, wingless, cream-colored, grub-like, and in most species, blind. They're rarely noticed by homeowners because they spend their lives either underground, in the shelter tubes, or inside the wood that they're feeding on.

The worker termite caste is the caste responsible for foraging for and locating food, excavating galleries in wood, building and maintaining the shelter tubes, caring for the young, and feeding the queen and the soldiers. (Because their large mandibles are adapted for defense, the soldiers of most termite species are unable to chew wood and are dependent on the workers for their food.)

Termite workers religiously avoid both light and air currents. If a shelter tube gets damaged, workers will immediately converge on the site of the damage and get busy repairing it (usually under the protection of soldiers standing guard for predators in established colonies).

Life in a termite colony is very efficient and well-organized, and it's the workers who do the grunt work to make it all happen. Before you start getting all sentimental, though, remember that the workers are also the caste that does all the damage to our homes. They're the only termite caste whose jaws can chew wood. Every bit of damage done by termites to your home, and every dollar you spend fixing it, can be blamed on the workers. 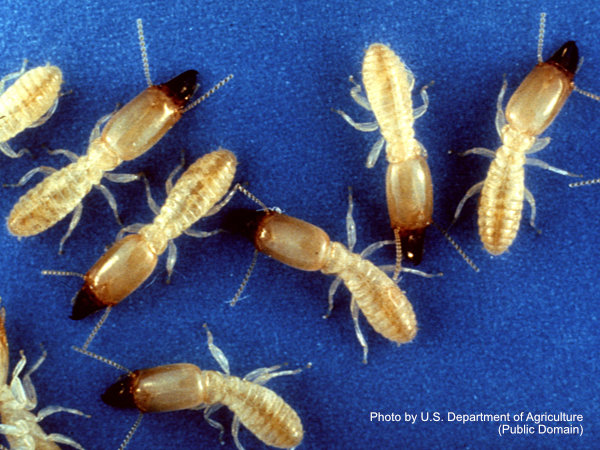 Soldier termites, like soldiers anywhere, are responsible for defending the colony.

Termite soldiers are present only in established colonies, which in most species means any colony that has survived its first generation or season after being established by an alate pair.

The presence of soldiers in a shelter tube or a piece of infested wood doesn't necessarily mean that the infestation is long-standing, but it does mean that the colony infesting the house has been around for at least one generation. Soldiers aren't usually present in first-generation colonies.

The sole job of the soldier class is to defend the colony from danger, mainly predators like ants, birds, and insectivorous mammals. In most species they do this using only their pincer-like mandibles, but in a few species the workers can produce a noxious substance that they spray on their attackers.

The soldiers' mandibles are adapted to fighting and self-defense, making the soldiers incapable of chewing wood. Like juvenile termites, they have to be fed by the workers. 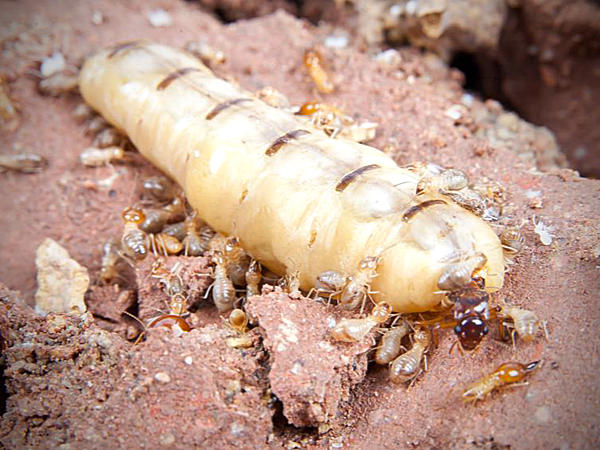 Every termite colony has at least two reproductives.

The queen termite, shown in the picture here, is the primary reproductive and produces all or most of the eggs for the colony. In a first-generation colony, she was the alate who first established the colony when she left the nest where she was born and started one of her own with a male who usually came from the same nest.

The queen lays eggs every day, at least during the warmer months, which the workers carry away to another part of the nest that serves as a nursery where the young are raised. Queen termites can live and lay eggs for well over 10 years.

There also must be at least one male reproductive, sometimes called the king, whose duties are... Well, let's just say it's good work if you can get it. The king and queen are both fed by the workers.

In addition to her reproductive duties, the queen also regulates the life of the colony through a complex and barely-understood system of chemical messengers called pheromones that regulate literally every aspect of the colony's existence. 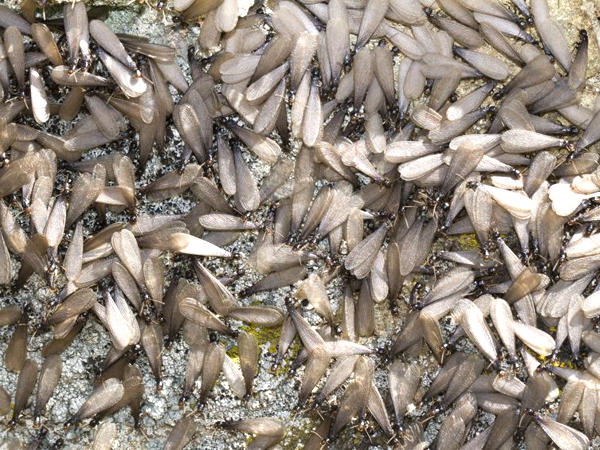 Winged Reproductive Termites are properly called "alates," but are more often referred to as "swarmers" by most exterminators. They are produced only in mature, well-established colonies.

Like everything else about a termite colony, the queen decides when alates will be produced. Some colonies produce alates after only a few years, but others never produce alates. Some entomologists speculate that a queen will allow alates to be produced when her own egg production is beginning to tail off, while others believe that factors such as the population density of a colony or the availability of food are determining factors.

The alates' job is to leave the nest in pairs (commonly known as "kings" and "queens"), clumsily flutter off into the world in search of a suitable patch of soil, and establish a new colony if they find such a patch. If successful, they will become the king and queen of the new colony and immediately start laying eggs and raising the first generation of workers.

Alas, the great majority of alates will fail to establish new colonies and will die in the attempt. Many won't even make it out of the house. Their lifeless carcasses and shed wings lying on the floor and on window sills are often the first evidence that homeowners see that their homes are slowly being devoured by termites.